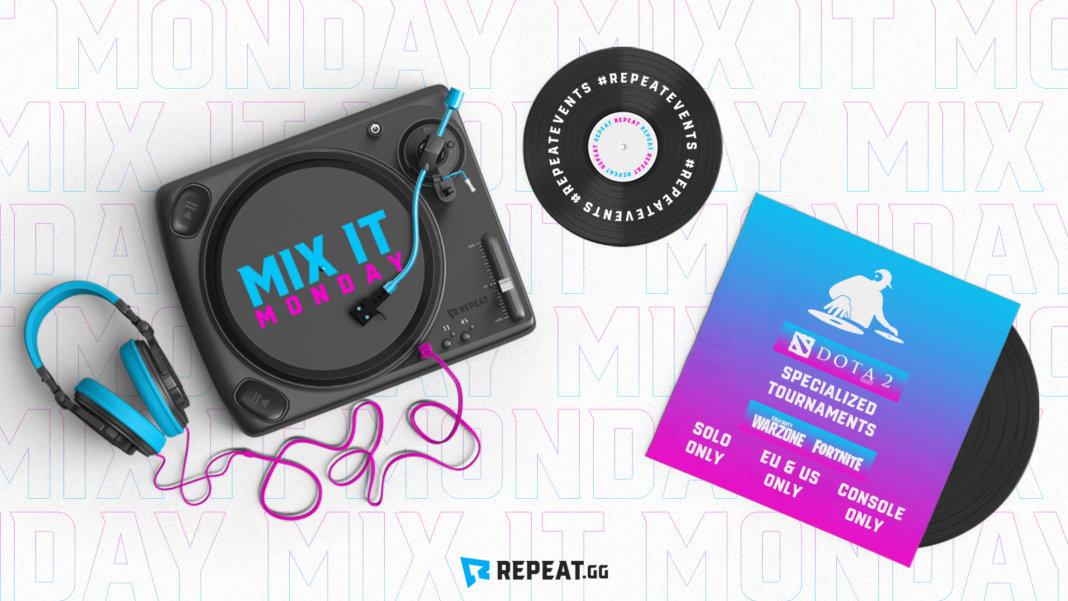 Repeat.gg has been hosting weekly free tournaments on Tuesdays, Fridays and Sundays, giving players several different free tournaments to look forward to each week. Well, now we’re introducing more weekly events for those who want to take those winnings and turn them into even more winnings.

Mix It Mondays and Wednesday Wagers are coming to Repeat.gg in the next couple of weeks!

Mix It Mondays will small coin and cash entry tournaments that will be different from our standard scoring formats in their own unique ways. For example, for the first Mix It Monday, users will be able to play in Solos Only, Console Only, US Only, and EU Only tournaments for a small fee of $0.25 or 250 coins.

These tournaments are a way for us to find out how much you like these new tournament scoring formats and, depending on how much the users are entering them, they can become part of the standard tournament offerings and more than just on Mondays.

And don’t worry, we have plenty of more ideas than just those mentioned above.

Wednesday Wagers are going to be familiar to many Fortnite players, but our version of Wagers comes with the Repeat.gg twist and will be offered in all of our games. You won’t be fighting the user in your head-to-head tournament directly, but rather competing in normal game modes like most tournaments are held currently.

The difference from wagers and other normal Weekly Event tournaments is these tournaments will have an entry fee, and will be maxed at two participants allowed in the tournament. So you will only be competing against one other Repeat user.

Even though these Wednesday Wagers will have an entry fee, we will be incorporating a larger prize pool tournament where only those who have entered a Wednesday Wager that month will be eligible to enter the tournament. Stay tuned to our Social Media and Discord for the official Wednesday Wagers announcement and rules.

Be sure to follow Repeat.gg on Twitter and Facebook (@repeatgg), or join our Discord. We will announce when these tournaments are officially available on those platforms.

How Repeat.gg is Helping Gamers Grow Their Social Media Following

Best Beginner Heroes to Get You Started Playing Dota 2

How To Make Money From Gaming – Esports & Skin Betting

League Of Legends Tournaments Have Returned on Repeat.gg

10 League of Legends Streamers You Should be Following