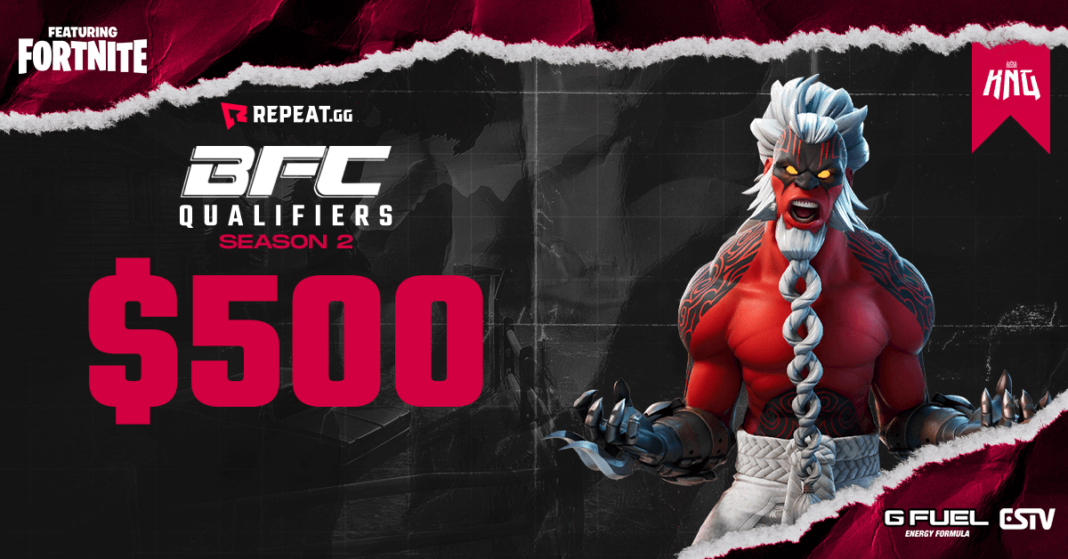 Repeat and Team Kungarna are back to bring you the Fortnite Box Fight Championship, aka BFC, for a second season!

Without the Fortnite World Cup in 2020, fans and players of the game were understandably bummed to not have the best players in the world competing for millions of dollars in prizes. The 2019 World Cup brought new players to the forefront, allowed competitive players a chance to see who was the best, and provided elite content for those who consume esports.

The Box Fight Championships launched in the summer 2020 and gave fans itching to see the best of the best compete a chance to see them in action. Season 1 was full of intense battles, insane comebacks, and some of the top Fortnite players in the world securing bag after bag.

Expect some of the same professional players who competed in last season to return and defend their crowns. I mean, just look at how much money was given away last season, why wouldn’t they come back?

Like last season, Repeat.gg will host a qualifying tournament and the winners will be invited to compete in the BFC Finals every Monday during the season.

When Do The Qualifier Tournaments Run?

From Monday to Saturday, a free-entry qualifier tournament will be available to join on Repeat.gg. This will follow our same normal Fortnite scoring rules, except you will have to play Arena Solos for your scores to count in this tournament.

What Do I Have To Play For My Score To Count In The Qualifier?

Arena Solos will be tracked on all platforms, so yes, mobile players can compete in this tournament along with PC and all consoles.

What Region Will The Qualifiers Be?

North America since the influencers will be NA and we want the ping to be fair.

What Happens After Qualifiers?

The top places from the qualifying tournament will then get put into the Finals where they have a chance to compete against other Fortnite streamers/competitive players in a bracket style tournament, which will be held on Monday.

What Is The Format of the BFC Finals?

The format for the Finals will always be Box Fight, Realistics, Zone Wars, and Build Battle and will be 1v1, 2v2, 3v3, or 4v4 depending on the week. On weeks there are duos or trios, each Repeat qualifier winner and each influencer will choose their own teammates to compete with them.

What is the payout structure for BFC Finals?

How Do I Know Which Pros Will Be In The Finals?

We will announce the participants of each week’s finals on social media in the days leading up to the qualifiers launching. Be sure to follow BFC, Repeat and Team Kungarna!

You know you have dreamed of competing against your favorite players and proving you have what it takes to compete with the best of the best. Who will be the next underdog to take down the big names? Will you be the next Bugha?

The first qualifier has already begun! You can always go to this link to join the current qualifier which is running.