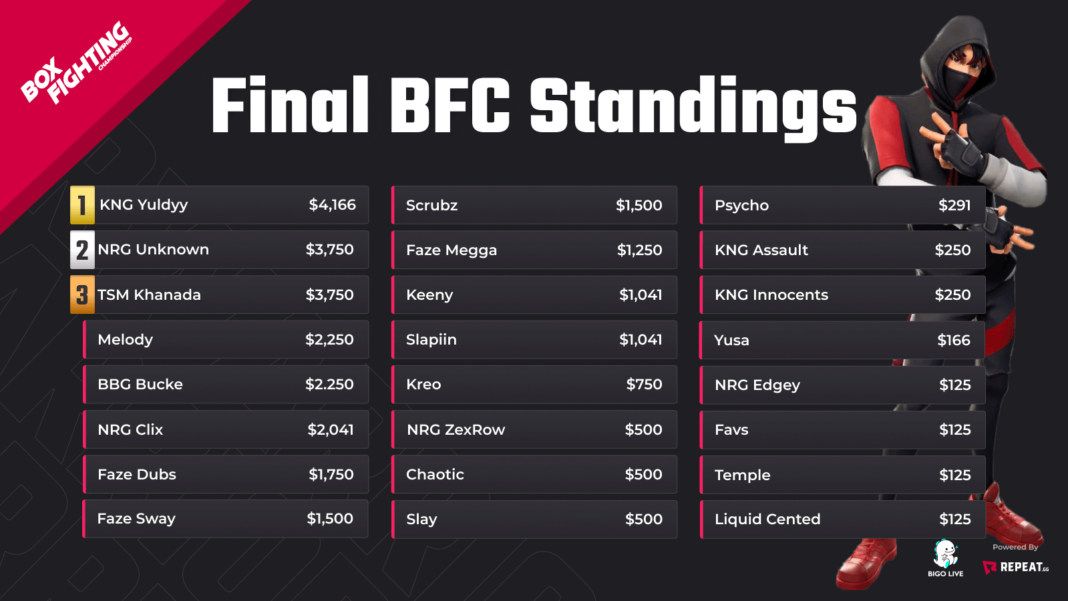 The past six weeks have been such an incredible time at Repeat as we’ve been part of the Fortnite BFC $5k Zone Wars with Team Kungarna and Bigo.

Each week we have hosted a qualifying event for anyone to place and get the chance to compete against actual professional Fortnite players and a $5,000 prize pool. Major shout out to the Repeat users who qualified and were able to show their skills in front of thousands and thousands of people watching on Twitch and Bigo.

We understand this is the kind of opportunity most Fortnite players dream about and plan to host similar events like this in the future. Stay locked in to Repeat’s social media (@repeatgg) for any updates on upcoming events!

The amount of money awarded during the BFC $5k Zone Wars Finals is no joke. The following is the full leaderboard of the money that went out during the six weeks of BFC Finals.

Big congrats to KNG Yuldy for securing the biggest bag!

Although the first season of BFC is in the books, the events will not finish here. This week we will begin hosting weekly events such as Twitter Tuesday, a password entry tournament where you have to go to our Twitter to unlock a password, Friday Frenzy, where we will release 70+ free tournaments at random in a 24 hour span, and Sunday Funday, where we change up the rules in some way to make it a unique experience. All of these events will be free to enter!

Keep coming back to Repeat.gg and join the latest Team Kungarna influencer tournament and the next U.S. Army tournament which will be live in the next few days as well.