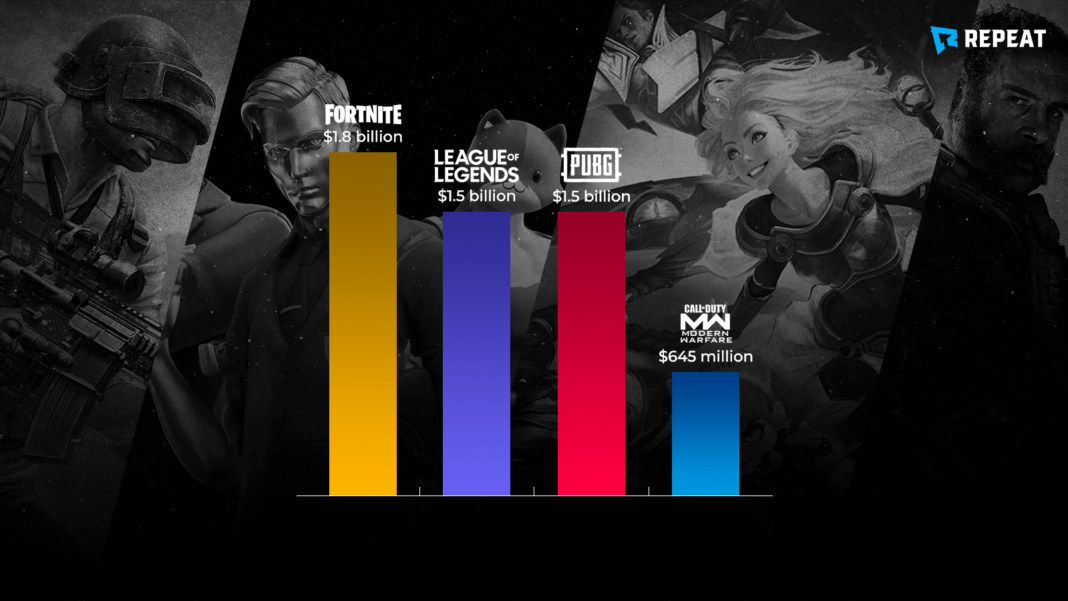 It’s thanks to developers producing successful games that the esports industry can develop as fast as it has. The highest grossing esports games from 2019 will lead the way in deciding the scene’s future.

We’re approaching the quarter-point of 2020 and the industry is starting to be dictated by top-grossing esports. There are thousands of video games that exist, but very few make it to the popular competitive landscape known as esports. Games that reach this peak become so popularized that revenue takes a large boost. The following is a list of the highest grossing esports games from 2019, which should dictate the future of esports in 2020 and beyond.

Starting off the list, Activision brings us Modern Warfare, the 2019 installment in the Call of Duty franchise. Modern Warfare was released in October 2019 and made a huge impression, making over $600 million in just three days during a weekend release. Claiming different badges like PlayStation Network’s highest ever digital sales and multiple awards for the best audio and online multiplayer, Call of Duty Modern Warfare stomped the markets.

Fans and professionals were all over it too, with Activision revamping their whole esports league around this title. Call of Duty League officially launched January 24 and their opening weekend hit a peak viewership of just under 103 thousand fans tuning in.

What’s more impressive is that this viewership was all on YouTube after an exclusivity agreement with Activision bringing Call of Duty League and Overwatch League to YouTube Gaming. With Twitch considered the king of streaming, their launch weekend is truly impressive.

Modern Warfare earned over $645 million in 2019 and that figure came before Call of Duty League’s launch too. About two months have passed since then and these monetary figures came from the end of 2019. By now, revenue is expected to approach $1 billion at the rate of fire Modern Warfare spread.

Player Unknown Battlegrounds takes the next seat, with over $1.5 billion in 2019 revenue according to Sensor Tower. PUBG was one of the first major battle royale shooters and though it was eclipsed by Fortnite, it still sees success. In early 2018, the Royale Pass was launched. Games everywhere were seeing success with battle pass options loaded with cosmetics and PUBG Corporation sought to capitalize on this movement.

One of the biggest appeals to PUBG fans, and arguably the reason it’s so popular and lucrative, is due to its mobile accessibility. In just the third quarter of 2019, PUBG Mobile made over $495 million, mostly due to the Chinese rebranding to Game for Peace, allowing the game to be accessible there.

As of December 2019, China accounts for over 108 million downloads with India leading the way at over 116 million downloads. Combined, China and India make up about 40 percent of all PUBG Mobile downloads. Two countries in the whole word make up nearly half the PUBG Mobile player base. Esports communities see these two nations, especially India, as the next hub for esports with mobile usage fast developing. And PUBG Mobile is the catalyst in growing this audience.

As the top competitive game, League of Legends will consistently lead as one of the top grossing esports. The MOBA title is viewed as the pinnacle of esports and the reason for its success at reaching a high player is because it’s free. In September, for their 10th-anniversary event, Riot Games disclosed some statistics, stating that League of Legends sees nearly 8 million concurrent players on a daily basis. Massive player counts and large followings explain how League of Legends almost hits $1.5 billion in revenue for 2019, according to a report by SuperData Research.

Developer Riot Games made big highlights recently with their League of Legends news from their 10th anniversary event where they announced the production of seven new games to the 2019 World Championship that reached just under a peak count of 4 million viewers, Riot Games keeps on top of the record making.

2020 holds lots of potential for the studio to further increase their revenues with new in-game cosmetics and the release of new titles like Valorant. SuperData’s study also revealed that League of Legends players are about half as likely to spend money on the game as compared to Fortnite players, bringing us to the leader in esports revenues.

Fortnite, the world’s top battle royale unsurprisingly leads as the top grossing esports in 2020. Publisher Epic Games does a stellar job at keeping players invested in the game, making sure there is a constant supply of new content. Utilizing battle passes with dozens of in-game cosmetics and introducing new weapons and game modes, players and fans are satisfied with the state of the game.

Fortnite also appeals to all ages, including a large majority of youth, which helps account for its $1.8 billion 2019 revenue according to SuperData. This is viewed as a stable point for Fortnite since their previous year was their big performer.

2019 was a big boost for Fortnite in its competitive scene as well. Fortnite esports finally showed its nature at the Fortnite World Cup. Boasting over 2.3 million concurrent viewers during the Solo Finals, the event brought light to esports star, Kyle “Bugha” Giersdorf. Then only 16-years old, he made national headlines by winning $3 million. This feat and the popularity of the Fortnite World Cup helped grow player count, thus increasing Epic Games’ revenue.

The sheer amount of money Epic Games puts out on its competitive events is also a reason that fans are more inclined to play the game. Early in 2019, Epic revealed a $100 million prize pool for 2019. Although it was scattered throughout the year in various events and concentrated on the Fortnite World Cup, an announcement like that created waves in the esports community.

Not only that, but Fortnite also has a strong streamer culture tied to the game, so fans always have entertainment awaiting them. Tfue, Ninja, and many more bring even more fans to Fortnite as their streaming personalities and careers appeal to a variety of audiences. With all these factors in play, it’s no wonder 2020’s top grossing esport is a competitive battle royale that welcomes all ages.

Repeat.gg is one of the largest automated esports tournament platforms in the world. Sign up now and start earning today!

Call of Duty Warzone Beta Is Open to All Players