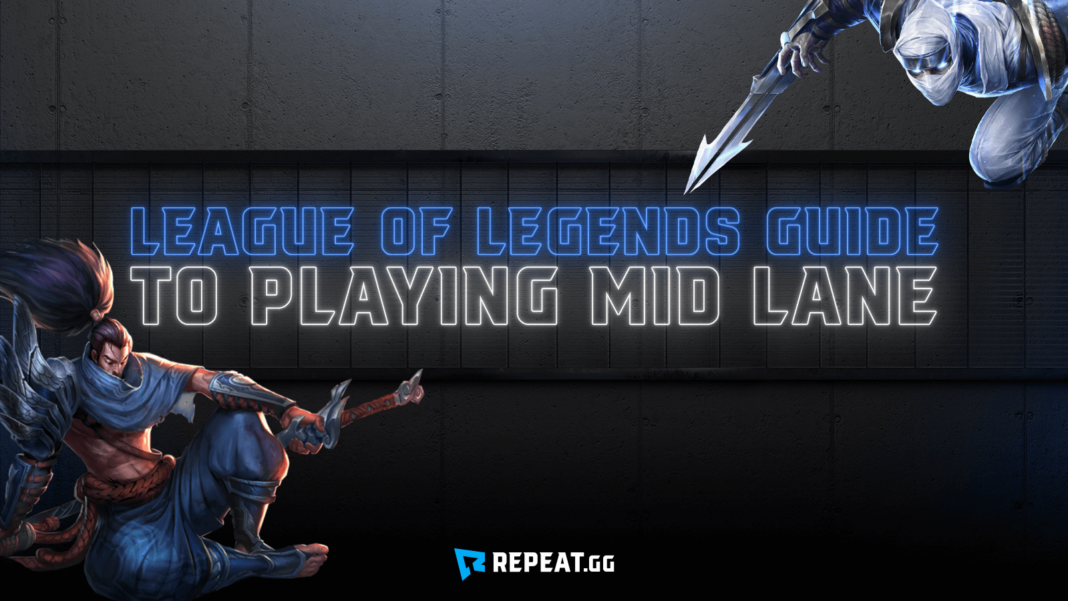 The mid lane may be the most difficult role to play in MOBAs; you’ll be an expert in no time after reading this League of Legends guide to mid lane.

So, you want to learn how to become a mid laner eh? Well, it won’t be easy, but if you are willing to put in the time, then I’m willing to help! The following is a League of Legends guide to playing the all important mid lane role.

What is a Mid Laner?

Mid laners are champions that dwell in the mid lane. Your mid lane player is the core of any team and is arguably the most difficult role to play in League of Legends. This is due to the amount of game knowledge needed to perform well in the role. There are a few different categories of supports, but for now, we will cover what I believe are the three main categories: Control, Burst and DPS. Let me explain these categories a little bit more.

Control champions (often referred to as control mages, as they are always mages) are champs such as Anivia, Orianna and Lissandra. They are characterized by their high levels of CC and zoning potential as well as their balanced playstyle.

Control mages are for people who excel at macro play and care more about how the entire team is doing rather than just themselves. They have incredible team fight potential due to their innate ability to completely lock down enemies and/or cut them off from the rest of their team, making control champs an invaluable asset to have.

Burst champions are champs such as Katarina, Talon and Leblanc. They are characterized by their ability to dish out lots of damage within a short time window or ‘burst’, thus giving them their name.

Burst champs are classic solo queue picks, as in the solo queue environment you cannot always trust your team to perform top certain standards, making it easier to just pick a burst champ that can solo carry the game provided they get a big lead in the early game. They have poor team fight potential due to their squishiness and lack of consistent damage/CC. For this reason, they can only really look for picks on isolated targets.

DPS stands for damage per second, and having a high DPS means you are putting out consistently decent damage throughout an extended fight. Examples of DPS champs include Cassiopeia, Azir and Ryze. They tend to play more like ADC’s but with more combo abilities and CC.

DPS champions are the premier choice for late-game team fighting, guaranteeing you always come out of a fight with a positive outcome. However, due to the relatively short length of games in the current meta, it is best to avoid scaling champs such as these, as it is very rare that you get to the stage of the game where they become useful.

How do you play a Mid Laner?

There are many things that need to be learnt to play a mid laner effectively. If I went into detail about them all, you will have most likely turned to dust by the time you finish reading this article. So I will run you through some of the key aspects of the mid lane!

As a mid laner, you will generally be using the Doran’s line of starter items, ring for AP and blade for AD, there will also be times when you will start a Corrupting potion instead. Of course, there are outlying examples, such as building a sapphire crystal for a starter item as Ryze. Also whilst this is not a starting item, always make sure to buy a control ward or two whenever you back, this is not an option, it is mandatory. Good vision saves lives!

Now onto perhaps one of the most crucial parts of playing as a mid laner, and that is learning wave management. This is the part of learning the role that always bores people, but it is fundamental and will improve your play tenfold. First off let’s talk about the general rules for minion waves.

Now that we have those basic rules out of the way, let’s talk about the different ways in which you can manipulate the wave to punish the enemy team. There are 3 basic wave manipulations you can perform: Freezing, Shoving and Slow Pushing.

Freezing is a form of wave manipulation in which you ‘freeze‘ the wave in front of your turret and keep it there indefinitely. This is best used in a situation where you are ahead of your opponent and want to put them further behind. The way you set up a freeze is by letting the enemy push up to your tower, then taking minion aggro to keep them in place until your wave arrives.

In order for a freeze to be successful, the enemy wave should always have two or three more minions than your own, and you should only ever last hit the minions, never damage them early. By doing this, you put the enemy in a position where he cannot CS without being overextended and susceptible to ganks. If the enemy tries to walk up for CS, you are also in a position where you can zone him off with little consequence, as should anything go wrong, you can simply retreat under your turret.

Shoves are a form of wave manipulation in which you ‘shove’ your wave all the way to the enemy turret to deny gold and XP. Shoves are best used when the enemy has recalled or roamed. To pull off a shove, you simply have to keep killing the enemy waves, best done with abilities to quicken the process, until you reach the enemy turret. At this point, you can either look to roam or recall for items, whilst the enemy laner loses all his potential CS as it is killed by the turret before he can get back in time.

Slow Pushing (Only use bot or top)

Slow pushes are a form of wave manipulation, in which you utilize wave pushing mechanics to amass a large army of minions that will eventually crash into a turret and destroy it if not responded to. Slow pushes are best used as a distraction so you are able to set up for objective plays such as Baron, or can also be used to force the enemy into a guaranteed objective loss if utilized in conjunction with a split push in the opposite lane.

To set up a slow push, all you have to do is kill one or two caster minions in the enemy wave, two if you want a faster push, one if you want a bigger wave. Your wave will naturally begin to push towards the enemy turret and will slowly grow in size as time goes on.

If you are playing a ranged champion in mid (which you most likely are) you will have a lot of difficulties with last hitting minions, due to your low AD and/or travel time of basic attacks. This can be easily rectified by simply walking closer to the minion you are attacking, eliminating travel time, as for the low AD, that is just something that comes with practice, as you learn how much damage your champion does at all stages of the game. (Remember: Your ultimate goal is to be hitting 10 CS per minute!)

Knowing when, or if to roam can be rather tricky for new players to grasp. This changes on a matchup by matchup basis and will also change depending on the type of champion you are playing. If playing a mobile burst character such as Leblanc or Talon, then you should be looking to roam every time you shove the wave into the enemy turret, especially if they are playing champions such as Anivia, which don’t farm well early.

However, if you are playing a champion such as Orianna, you would be better off staying in lane and farming, rather than looking for kills around the map. This is due to the fact that you have very little mobility, and in reality, farming is actually much more gold effective than kills are. 17-18 CS equates to the same amount of gold as one kill does, meaning playing champs that specialize in farming waves is a much better way to guarantee your power spikes as you can get more CS per minute than you can get kills per minute early on.

As a mid laner, map awareness is incredibly important, as you are in the middle of the map, you are twice as susceptible to ganks as any other lane, as you can be attacked from all sides. For this reason, it is very important to know what is going on around the map at all times. The best thing to do is to train yourself to look at the minimap after every CS. This ensures that you are regularly updating yourself with information.

Another trick to learn is to utilize the F keys e.g F2, to see the camera perspective of each of your teammates, cycle through the perspective of each of your teammates whenever you are walking to lane or towards an objective, but be mindful to only spend a short time doing this, as you are vulnerable whilst doing this. Finally, to keep yourself safe, once you ward one side of the lane, try and play on that side, that way, you can keep yourself safe from ganks.

Thank you for reading this League of Legends guide to playing mid lane. Now you’re prepared with a handful of knowledge that should help you mid lane with any champion! Get to practicing and see you on the Rift.

Related: Top 10 League of Legends Supports to Play in Competitive