Repeat.gg
Home Blog Strengths And Weaknesses of Every Streaming Platform 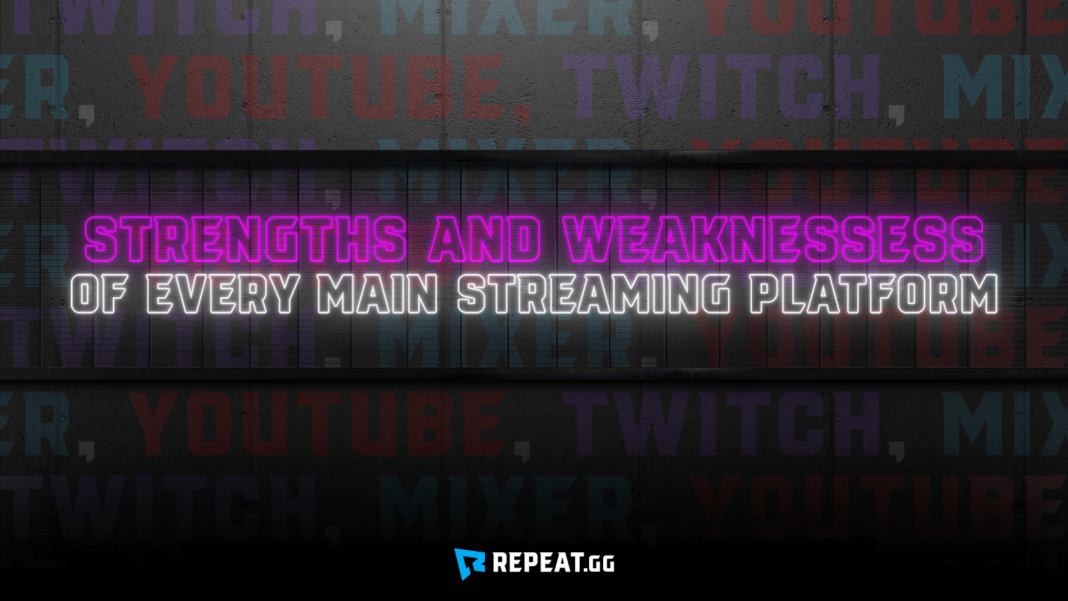 Top streaming platforms are increasing in value, now more than ever, as live streaming captures more fans and gamers seek the best location to watch other players. Each platform holds its own unique characteristics and fans often wonder which service to use. We’ve brought you a list explaining the strengths and weaknesses of every streaming platform so you’re best equipped to find a favorite.

The king of the herd, Twitch leads as the most used streaming platform and has been the leader for years. Introduced in 2011 as a spin-off from Justin.tv, they sprung into action, taking on the major esports of the time and accommodating new streamers. With their speed at handling the new gaming/esports industry, Twitch found their way to the top. Statistics from SullyGnome show that the site received an average of 1.7 million viewers in the last month. This is where to go to find the most streamers and viewers with an efficient user interface.

Twitch is also increasingly partnering with games like League of Legends, FIFA 2020, and Doom Eternal to provide in-game rewards to those who link accounts and have Twitch Prime, which comes free with Amazon Prime. They’ve been aggressively expanding their reach to retain viewers as more and more streaming platforms become available.

Twitch’s main weakness is its tendency to help notable streamers with issues voiced, but not so much when smaller streamers are involved. This bias brought the media and notable streamers like Imane “Pokimane” Anys to paint them negatively in recent years.

Launched in 2016 under the name Beam, the streaming service was soon bought by Microsoft and rebranded to Mixer. Mixer has held a small following and stayed under the radar until the summer of 2019 when they made headlines by securing Tyler “Ninja” Blevins in an exclusive streaming contract. The Apple store doubled the number of downloads on the app after the news broke.

As a newer streaming platform, Mixer holds smaller communities and doesn’t suffer from the same feeling of being buried that Twitch deals with. Communities and streamers are easier to interact with. Mixer also boasts FTL (faster than light) streaming, a website protocol that allows streamers and viewers to interact in real-time. FTL streaming is a unique feature that further boosts Mixer’s community. Unfortunately, as a newer platform, it’s difficult for streamers to see increased viewers and viewers see less of a chance of social growth with small circles.

Everyone knows of video giant YouTube, but far fewer people know how invested in gaming YouTube actually is. Launched in 2015, Google capitalized on the growing market of gamers by launching its own streaming platform, YouTube Gaming.

The site holds over 25,000 games and content is not limited to live streams or previous recordings. YouTube Gaming taps into the well of gaming videos, pushing video content into the mix. When news broke of the Overwatch League and Call of Duty League signing exclusive streaming contracts with YouTube Gaming, a surge of viewers and fans similarly followed.

Strengths for this streaming platform lie primarily in its clean site layout. Nearly all gamers have used YouTube at some point or the other, and YouTube Gaming replicates the layout, highlighting top streams and recommended gaming videos, both of which have customizable video stream quality.

Users can easily shift from one stream to the next with more personalized recommendations for content. Streamers can also benefit from working with Google AdSense advertising due to the sites’ association. YouTube Gaming’s main problems come from a lack of community support from YouTube and a lack of revenue tools for content creators who rely on ads after monetizing videos.

Popular social media platform Facebook began its journey into gaming and esports in early 2018 as Facebook Gaming. Like most gaming companies, they started off small, relying on their brand to provide viewers. Streamlabs reported an active streamer increase of 236% between early-2018 to mid-2019, proving that there is potential there. Most fans seek alternatives when it comes to their streaming platform of choice, but Facebook Gaming will gain streaming attention over time as the company clearly has a permanent investment in gaming.

Although Facebook Gaming may be very limited now, they have a huge audience to pull from. Many gamers already have social media accounts with Facebook, so taking the next step and going into the gaming section would be a small jump.

The community, engagement, and streamer base is very small now but it could all change based on the platform connections and marketing that’s done between Facebook Gaming and their social media. They’re already fighting their weakness of a lacking user base by signing an exclusive streaming contract with Disguised Toast, a top streamer, providing streamers with much better monetization than Twitch and other top streaming platforms, and their new LevelUp program.

Juked went live in 2019 as a new all-in-one streaming service aiming to make fans of esports’ lives easier. With the goal of streamlining every single esport, be it upcoming tournaments, live events, VODs, a sleek website offering every title at a time is just what fans need.

Ben Goldhaber, the co-founder and CEO of Juked, described the new streaming platform’s mission, “Juked’s mission is to reinvent how people discover and watch the esports events they love… Power users can curate Juked by their favorite games and teams, but know that our goal is explicitly to expose you to content that you may not have discovered otherwise.”

At a glance, you can see that the homepage isn’t cluttered like other streaming platform competitors. The site’s homepage is divided into well-organized sections so users can find everything they need from the start.

Obviously, the biggest perk to Juked is the ease of access and that the company is intentionally showing off different content in order to reveal more to fans. But the downside to an all-in-one streaming location is frame lag for computers that may struggle to process multiple streams. Thankfully, this only occurs on the homepage.

Their other flaw is that the platform hosts streams from other services, such as Twitch and YouTube Gaming, meaning that a Juked community is very small and can’t communicate well without their own stream chats.

Built upon the Lino Network blockchain currency and launched in 2017, DLive is a new and small streaming platform that claims to take no cut of a streamer’s revenue. In fact, DLive pledges they will never take money from their well-deserved content creators. They can support themselves because of their own blockchain ecosystem that sustains them with viewership, the reason why they can give back more to their streamers.

DLive made their mark on the gaming community by marking a contract with top YouTube creator, Felix “PewDiePie” Kjellberg. PewDiePie was live streaming on DLive for months, even donating up to $50,000 to streamers who tuned in to his first stream there. That brought the platform some much-needed viewers, who can more easily interact with creators.

Streamers can shift their focus fully into their game and community interaction since revenue percentages are so high. The DLive streaming platform is small and lacks both viewers and streamers, even more than Facebook Gaming, but because of that and their support for streamers, fans can expect more quality interactions here.