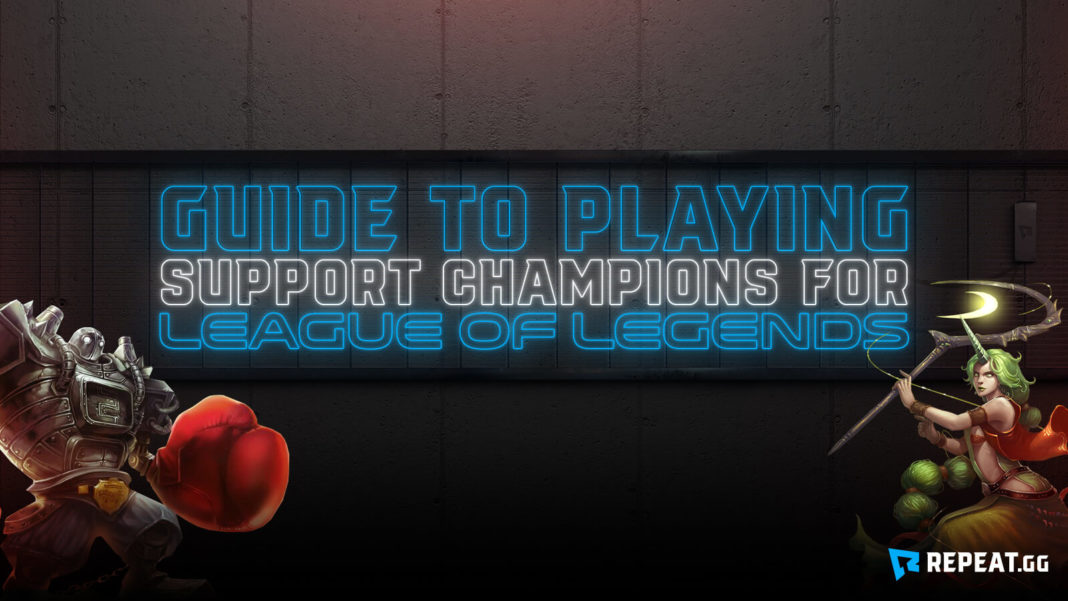 Support may be the most underrated role in MOBA; the following is a League of Legends guide to help you get started as a support champion.

So you want to learn how to play support in League of Legends, eh? Well, you have come to the right place. Over the course of this guide I shall get you up to speed and ready to stand toe-to-toe with the very best.

What is a Support?

Supports are champions that dwell in the bottom lane (unless your name is Nubrak) and get their namesake from the fact that they are ‘supporting’ another champion, namely, the attack damage carry (ADC).

Many people have this image of supports being all about healing and providing shields, but in reality that only makes up a very small percentage of support champions. If you feel like solo-carrying the game, why not play Pyke and assassinate your way to victory? Maybe you feel like being the front line tank, keeping your teammates out of harms reach whilst simultaneously setting up picks, then maybe you should give Nautilus a try. Hell, maybe you feel like being a jack of all trades, and you want to do it all, damage, picks and utility, then perhaps you should give the ghostly Morgana a try.

The point is, in reality, you can make anything work in any lane, and that sentiment rings all the more true when it comes to the support role.

How Do You Play Support?

There are many aspects to playing support, and your play style will differ depending on what champs you are playing. For example, on someone like Pyke, you will be looking for roaming opportunities to be able to get your mid laner fed. On the other hand, champs such as Yuumi prefer to stick closely with their ADC, in order to get them as ahead as possible whilst also minimizing self-risk.

So let’s dive into some of the key aspects of the support play style that applies to pretty much any champion played.

If you are used to playing roles like top or mid, you will no doubt be accustomed to the “Dorans” items and other common starter items, such as Corrupting Potion. However, supports have their own line of specialized items that help keep them relevant throughout the course of the game. There are four of these ‘support’ items: Spellthief’s Edge, Spectral Sickle, Steel Shoulderguards and Relic Shield.

They fall into two categories, poke and farm, with each category containing an AP and AD variant, for poke you want Spellthief’s (AP) or Spectral (AD), and for farm you want Shoulderguards (AD) or Relic (AP). Farm-based support items tend to be picked on tankier champs who are there for setting up picks, allowing them to supplement both their own and their ADC’s gold. On the other hand, poke based items are usually picked on mage and enchanter supports, as it allows them to constantly be raining down damage on the enemy, whilst allowing their ADC to farm freely.

The support items are unique in the fact that they have quests that allow them to upgrade, the quests are to earn 500 and then 1000 gold using the item, allowing for a total of 2 upgrades, These upgrades not only improve the stats of the item, but also turn them into warding trinkets, perfect for gaining vision control with.

As a support, it normally falls on you to secure vision control of the map, now let me make something clear before I continue, supports are not the only people who should ward, everyone should be deploying wards. If someone tells you that it is purely the job of the support to ward, then it is safe to assume that they don’t know how to play the game and are hard stuck Iron 4.

Moving on, vision is extremely important at all stages of the game, but perhaps the most crucial time is in the early game. Early wards have the potential to save you from ganks, or even allow you to turn the tables on the ganker, securing yourselves a kill. They also allow you to track what the enemy jungler is up to, allowing for counter jungling opportunities, or sneaky objective kills.

Some of the best early spots to ward are:

Opposite to what many fledgling ADC’s may tell you, your job is not only supporting them. Your job is to support your entire team, and there is no better way to do this than with roams. The key to a good roam is picking the right time for it. The ideal time is when you have forced the enemy ADC out of lane (even better if the support is gone as well) and you have shoved the wave up to the enemy turret. Whilst your ADC may be looking to recall here, this is the perfect opportunity for you to waltz up to the mid lane and look for plays there.

Being an effective support is all about maintaining your up time, always looking for something more you can do. If it is not possible to set up a play in mid due to your mid laner being way too pushed up, then look for a deep ward in the enemy jungle, or look to secure an objective with your jungler. Only ever back when you have to, when you are low on health/mana or you can afford an item spike.

The Importance of Counter Vision

Whilst warding is good and allows you to see the enemy, you are not the only team that is able to place wards. The enemy team can do the exact same, allowing them to shut down your plays. This is where counter vision comes in. Once you have your support item upgraded once, you should get rid of your yellow warding trinket in exchange for an Oracle Lens (Henceforth referred to as sweeper).

The sweeper allows you to see enemy wards for a period of time and destroy them, this is best used in spots of high ward activity, such as Drake/Baron pit and near buff camps. You can also purchase Control wards in the shop for 75 gold apiece, allowing you to nullify enemy wards and destroy them if you so wish. Do bear in mind that beginning to destroy a ward once nullified will grant vision to the enemy for a brief window, so it is best to not destroy them whilst in the process of taking an objective.

League of Legends is all about strategy and understanding your opponent’s strategy. It’s why we and so many millions of people love playing and watching the game. Hopefully, these tips on playing support in League of Legends will allow you to get a flying start in the role. Good luck on the Rift!

Repeat.gg is an automated online esports tournament platform that has several League of Legends tournaments currently running. Sign up now and join one of the few free-to-enter tournaments with cash prizes!

Brands Hit The Target But Miss Out On 99.9% Of Gamers