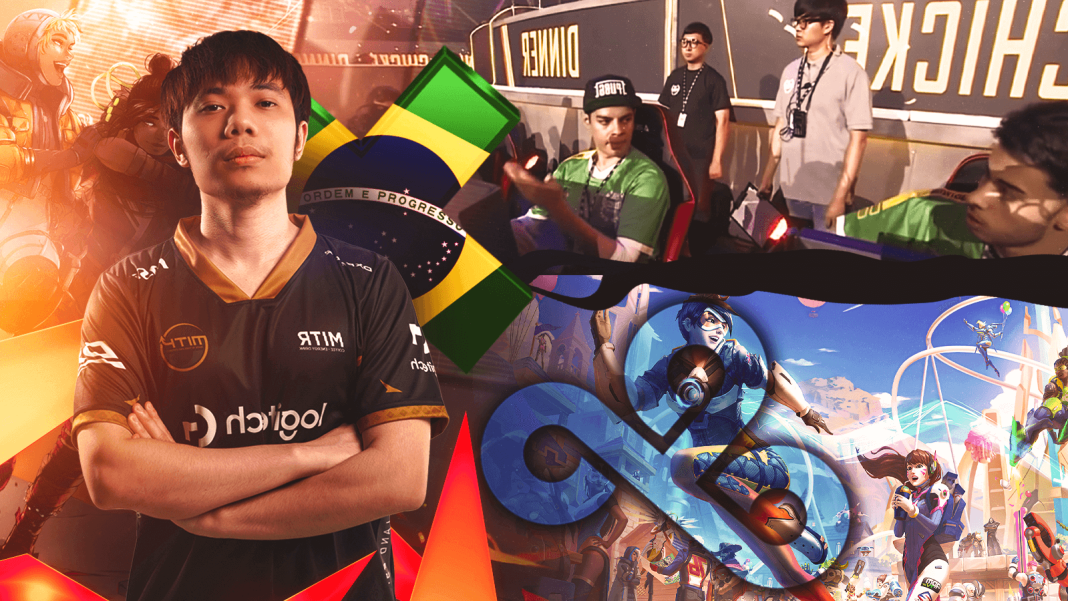 These professional misplays in Esports will go down as some of the biggest Esports competition fails of all time.

Esports professionals represent their chosen game at the highest echelons of competitive play. Professional players train endlessly to stay on top of their game and ahead of their opponents.

During tournaments, audiences expect nothing less but stellar and entertaining gameplay when these top teams clash. However, amid all the intense matches, sometimes professionals have a lapse in judgment and commit the biggest mistakes of their careers.

While there’s no shortage of professional misplays to choose from, these fails were specifically picked for how shockingly awful they were. These plays will go down as some of the biggest Esports competition fails of all time.

Skittlecakes, dooplex, and Knoqd are considered some of the best competitive players in Apex Legends and are currently playing for OpTic Gaming. But before that, they made a big name for themselves as the best team in North America during their time as team Esports Arena.

However, during the Apex Legends Global Series (ALGS) Pro League NA Region, team ESA spotted a Caustic canister inside an RV. They made the call to engage and swooped down on the vehicle, guns and abilities blazing.

The main issue is that there’s no enemy in there. To make it even worse, the whole team died to the aforementioned toxic canister. The embarrassing moment of how team ESA lost a 3 vs. 0 was caught from their perspective, including team comms.

The Evolution Champion Series (better known as Evo) is where all the biggest names in fighting games come to compete. Despite that, one moment during Evo 2015 will be fondly remembered as why players shouldn’t celebrate their wins too early.

One of Esports biggest competition fails of all time happened during the winner’s semi-finals of Guilty Gear Xrd. The iconic match was between players Ogawazato and Woshige. Both players won one set each, and it was down to the third and final set.

Ogawazato took the first round; then, Woshige snatched the second round with a sliver of health left. The crowd went wild, the shout casters started screaming in excitement, and in that adrenaline-fueled moment, Woshige stood up and proclaimed victory.

Except, the match wasn’t over. Ogawazato didn’t wait for his opponent to sit back down. He capitalized on his opponent’s blunder and ended the match without a scratch to his health bar. Then, after he won, Ogawazato popped off on stage while Woshige laughed away the pain on the desk.

The International is Dota 2’s grandest tournament where only the best team’s quality. A Malaysian team called Orange.Neolution was a strong contender during the tournament, especially their star player Mushi, who consistently performed well.

In the lower bracket, Orange was up against TI1 champion Natus Vincere. During their third and final match, Orange was looking primed to take the set, as they were up in gold, kills, and objectives. Orange pushed their lead and took down Roshan without a fight from Na’vi.

At this moment, Orange’s kYxY denied the Aegis, an item that could resurrect fallen players. He later said in an interview that he was rapidly spamming the attack button on Roshan, which is why he accidentally denied the rare drop.

While this was certainly one of the biggest Esports competition fails of all time, there were also other misplays from Orange during that match. In the end, Na’vi was able to seize a win and went to fight Alliance during the grand finals.

Overwatch — The Painful Origins of C9

C9 is one of the most common terms in Overwatch. It is used when a team forgets to touch the objective or payload which causes them to lose the match.

The meme stemmed from Overwatch Apex Season 2 back in 2017. When Cloud9, filled with strong players such as Surefour and Gods, faced off against Afreeca Freecs Blue.

The first time happened during overtime in Lijiang Tower, where they won the team fight but failed to touch the point. While one time was an unfortunate mistake, this incident happened two more times during the match. This simple but repeated mistake is one of the biggest Esports competition fails of all time, which is why the term is often used today.

Doublelift is one of the most recognized AD carries in League of Legends. Over his decade-long career, he’s appeared at Worlds multiple times and holds the most LCS championships in the game’s history.

Doublelift was representing Team SoloMid during Worlds 2017. TSM was up against a Korean powerhouse team, Samsung Galaxy. TSM needed one more win to exit the group stage and move on to the playoffs.

TSM was on the back foot the entire match. While SSG destroyed more towers than their opponents, they couldn’t push the lead since TSM was almost even in gold.

Around the 37-minute mark, TSM was able to scrap a winning teamfight while keeping all members alive. TSM immediately looked to take Baron in order to fight objectives with its buff. However, Doublelift had other plans.

Doublelift attempted to eliminate Crown’s Viktor—then died within a blink of an eye. TSM had to concede their biggest lead during that game without their primary damage dealer and lost their shot at Worlds shortly after.

PUBG held its first-ever Nations Cup back in 2019. This was an event where all-stars from the 16 selected countries fought in 15 matches over the course of 3 days.

During the 10th match of the tournament, the match was nearing its conclusion with three teams left in the final moment. Brazil just eliminated South Korea’s lone player, leaving the game at a 3v1 against Thailand.

At this moment, Brazil was the lowest-scoring team, so this almost guaranteed win would greatly boost their scores. Thailand’s DUCKMANZ found a solid position, and was trading blows against the likely winners. He knocked down one of Brazil’s players during this exchange.

Out of nowhere, Brazil’s Rdnx decided to hop in a car and attempted to flank the lone opponent. As he drove behind his target, he peeked out the window and started shooting. Instead, he ended up driving into the circle and into Thailand’s line of fire.

Now in the final 1v1, Thailand didn’t have the circle in their favor. Against all odds, DUCKMANZ scored the final kill to bag the chicken dinner. While Thailand’s last player certainly kept his cool during the final moments, team Brazil dropped the ball when they committed the funniest and biggest Esports competition fails of all time.