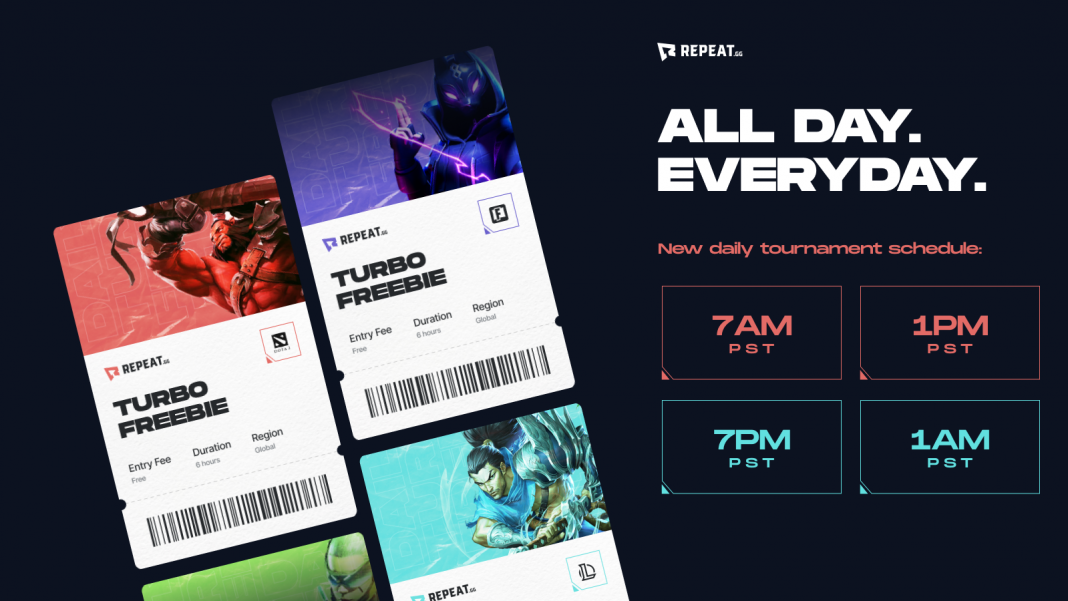 Repeat has a new schedule of free online video game tournaments for Fortnite, League of Legends, Dota 2 and Call of Duty: Warzone

Imagine playing Fortnite, Call of Duty: Warzone, League of Legends or Dota 2 and not earning cash or prizes while you do. Can’t relate.

Thanks to Repeat’s new daily, weekly and monthly free-entry tournament schedule, users will always have something to play to build up their account with cash or Repeat coins.

We released our first daily short term tournaments with our Friday Frenzy event which eventually turned into Daily Freebie, 3 24-hour tournaments which were available every day. We heard your feedback and have made some changes.

With the new Turbo Freebies, four will go live every day and last just 6 hours each, meaning there will be more prize pools but they will be spread out more to allow more users to win.

These tournaments will be live for registration for several hours prior to beginning and will start at 7am, 1pm, 7pm, and 1am Pacific Standard Time.

If these four free tournaments are enough for you, we will also have daily cash-entry tournaments which will last for 12 hours. Put your money where your skills are!

The Championship Series as you knew it will go away, but there will still be month-long tournaments to play for each game on our website. They will still feature specific roles or game types outside of the standard tournament.

Plus, these tournaments will last the full month instead of the 15 days the Championship Series tournaments used to last.

The best part of the new schedule are the week-long tournaments that will go live on the website every Tuesday.