Repeat.gg
Home Blog The Most Overpowered Fortnite Weapons in the Game’s History 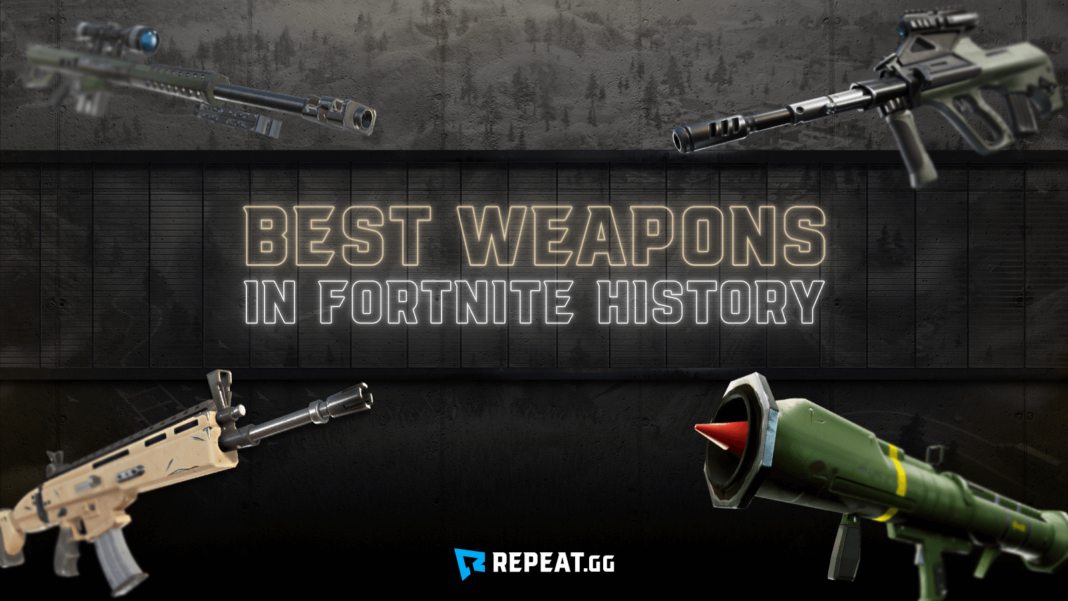 Fortnite claims millions of players and its thanks to content like new weapons that fans love the game. The best Fortnite weapons ever are listed below.

Fortnite, the most iconic video game title in the last few years, went through major shifts as weapons have been added and removed throughout the seasons. Much of the community’s love for the game comes from the excitement of new content constantly added, including the best weapons in Fortnite history.

Developer Epic Games succeeded in crafting a variety of awesome weapons, even influencing the Fortnite esports scene. We’ve brought you a list of the Top 10 Fortnite weapons throughout the game’s history.

The Heavy Sniper Rifle was introduced in Fortnite Season 5 and deemed overpowered from launch. Dealing 150 damage per bullet, a good shot with the sniper will instantly take out most players unless they’re well-shielded. They’ll even hit structures with over 1000 damage per shot.

Given that shields are more prevalent in Fortnite Chapter 2 Season 2 with all the slurp juice around and a reload speed of over four seconds, succeeding with the rifle is a little more challenging than before. The Heavy Sniper Rifle was reintroduced into the game recently so those sniper montages will be popping back up.

Fortnite’s Rocket Launcher is a weapon that’s existed since the beginnings of Fortnite, like every other shooter game. But unlike other games, this weapon is actually strong and even better late game. It’s very common to see players pick up a Rocket Launcher when the match is nearing its end. The reason being that these weapons are great for area of effect structure damage. When the fortresses and towers are made in build battles, rocket damage can quickly take out large sections of structures. Epic Games is definitely fond of this weapon since they even made common and uncommon Rocket Launchers to be found. It’s also a fun one since players can actually ride the rockets.

Considered a plus in any inventory situation for Fortnite Chapter 2, the Tactical Shotgun went through different waves of use and is currently considered a must-have. Unlike its brother, the Pump Shotgun, this gun fires much more rapidly and can decimate opponents with some well-placed shots. Even better if you can’t hit chests or headshots since the rate of fire is very forgiving. Another perk to using it is that the headshot damage is higher than that of an epic rarity combat/pump shotgun.

One of Fortnite’s previous weapons, the Purple (epic rarity) Tactical Shotgun, also known as a Purple Tac, was one of the best weapons in Fortnite history. Buffed in version 9.00, the shotgun had a higher DPS than the Pump Shotgun, with much higher headshot damage as well. It wasn’t long before it was nerfed to a weaker state.

Going through some changes over the year and being vaulted as well, the Light Machine Gun proved to be fierce in the Battle Royale mode. It doesn’t deal the highest damage as an assault rifle with the rare variant doing 25 damage per shot. But when it boasts a rate of fire at 8 bullets per second, that measly damage ends up ripping structures apart. For defenses immediately placed by enemies, the LMG is ideal and bullets will make it through to the enemy. It has yet to make an appearance in Chapter 2 Season 2.

Yes, you read that right. Epic Games’ hit video game Fortnite includes lightsabers from Star Wars as a weapon. Lightsabers are a mythic rarity weapon that were available for a limited time during the Star Wars Scene Preview Event. They were the only Fortnite weapon that could both block and deal damage since blocked bullets could be deflected around. They only dealt 45 damage per swing, but since players could move while blocking and it ripped through structures, it became a weapon worthy of legendary rarity.

Assault rifles are usually the main and default weapon in shooter games and there’s no exception here. This family of guns is the ol’ reliable of Fortnite, never becoming vaulted or significantly buffed/nerfed. The epic and legendary variants of assault rifles are dubbed by the Fortnite community as the SCAR Assault Rifle due to its similar appearance to the actual gun. A purple SCAR fights with a DPS of 192.5 and is always worth an inventory slot.

Another tribute to a popular movie series, Epic Games worked with Marvel to bring Thanos and his Infinity Gauntlet into Fortnite. Available only in a limited-time game mode, LTM Infinity Gauntlet, this was a mythic rarity weapon transforming the user into Thanos. From there, you received his abilities, a laser beam, a super jump, full shield and greatly increased health, and a whopping 80 damage per punch. According to Fortnite Wiki, the Infinity Gauntlet’s files remain in the game. Perhaps we’ll see a comeback to one of Fortnite’s best weapons?

Guided Missile is a type of Rocket Launcher that allows the user to freely control the direction of a launched missile. When it was released in Season 3, everyone thought it was overpowered. Even though the missile user was vulnerable by standing still, controlling a missile to dodge and find its targets was something else. It was quickly vaulted due to its power and when it returned with a nerfed 74 damage, the spawns were too few so it was vaulted again for lack of use. It’s had a rough history, but Fortnite’s Guided Missile was a true terror at launch.

Previously classified as an SMG, the Drum Gun was an obscenely strong weapon even substituted for shotguns. When fighting close range, assault rifles won’t always do the job so an inventory spot was usually dedicated to a shotgun. That is until players realized how strong the Drum Gun was. Though the accuracy isn’t good, boasting a DPS of 176 just from a high fire rate is huge. It was a true “spray and pray” gun but with much less praying. Drum Gun did not return for Fortnite Chapter 2 but is available in Season 2 as a mythic rarity Midas’ Drum Gun, found at The Agency.

Unarguably, the best weapon in Fortnite history is the Infinity Blade. Introduced and removed in Season 7, Epic Games created a melee weapon that boosts mobility, increased health, and dealt 75 damage per swing. That’s not even the best part. Infinity Blade lets the user destroy enemy structures in just one hit. With an empowered jump, one lucky player in a match could run around destroying built towers with ease, killing players in less than 3 hits, and receive a burst of healing after each kill.

When it was first released, the Infinity Blade user could even build too, though that was quickly nerfed out. The best Fortnite weapon created lots of controversies, even among established Fortnite pros like Tyler “Ninja” Blevins. Though pros are generally satisfied that the unfair weapon was removed, many fans miss it and look forward to the next overpowered Fortnite sword weapon.