These are the highest earning Esports countries based on figures gathered at the end of 2016, and the top three are exactly who you might expect.

Each country differs in what genres they are mostly known for over the last decade. Certain regions pick up on games based on popularity and exposure to their scene. Some countries are heavily focused on MMO genres or FPS genres, and these seem to be a common theme over the past decade other than the new major titles that act as a persuader (Prize Pools). The three largest games that pull in the greatest number of professional gamers across the globe is Counter-Strike: GO, League of Legends and Defense Of The Ancients 2 (Dota 2) due to their high prize pool and popularity.

Some countries are known for producing world-famous opponents and therefore recognised for their skill in those game genres. For example, South-East Asia is firmly known for their incredible APM (actions per minute) making them referred to as the RTS and MMO kings. For this reason, below you will see over the past decade the common theme for the renown countries and how they make up for most of their fortune. 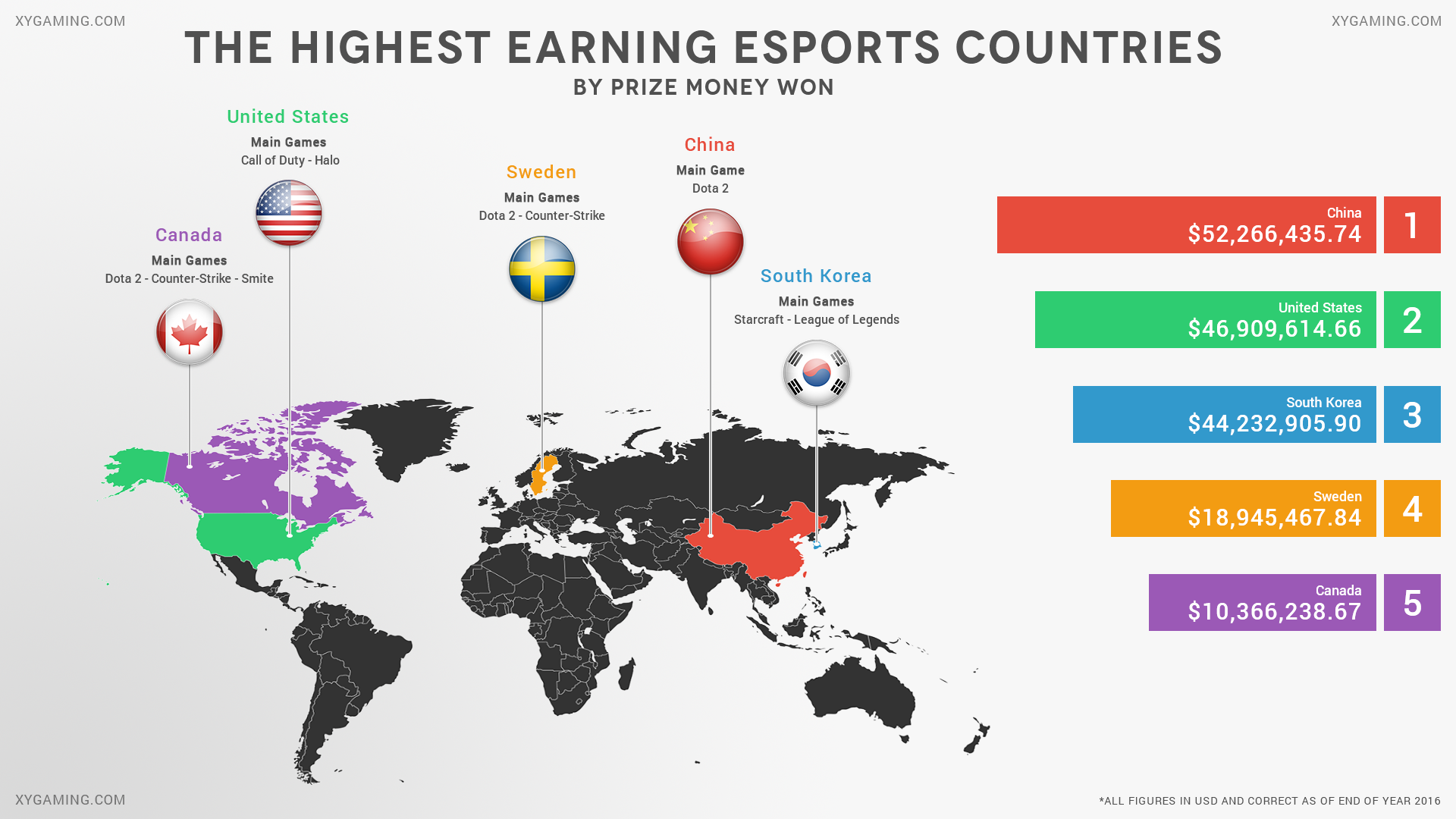 In this article, we will show you how each country receives the majority of their prize pools share from certain game titles and who are their top 5 highest earning individual gamers. All Prize money are shown in USD and is solely based off Prize Money won from all tournaments played.

One of the unique countries of them all is easily Canada, due to their success in the world tally for earning prize pools. Unlike other nations Canada rarely fields full teams, which may be attributable to fewer resources, or a player base that’s spread between mostly American and other international team rosters. What’s also interesting is that Canada does not have a clear cut highest earning game, making them one of the most diverse gaming countries in the world when it comes to winning prize money in Esports.

Although the top 4 highest earners for Canada are Dota 2 players from mixed international teams, it is still relatively unclear as to what their most successful game could be by titles won.

Summary – Canada has had four very successful players in Dota2 helping Canada rack up $4,392,670.83  which accounts for nearly half their total earnings.

Counter-Strike saw the same dominance for many years with the country Sweden taking the top spot for the scene, sharing it only with the Polish and Ukrainian Counter-Strike players. In fact, it is only recent, where any other country has been able to really compete against Sweden for the world title. The reason for this may be due to global popularity, and higher stakes are attracting more organisations and players to do anything to reach the top spot.

Much like Canada, Sweden’s top individual earners are from Dota 2, but the majority of their prize pools are made up from the Counter-Strike Series.

Over the course of the last decade, individual countries have dominated certain game titles especially the MMO’s & RTS franchises for many many years. The only real professional gamers were once South Koreans in the Starcraft series. Throughout the past decade, in fact, South Korea posed as the powerhouse in games like Starcraft and Warcraft. As a result of today, we see the same strengths on display in Overwatch and League of Legends, with South Koreans looking like unstoppable forces in those game titles also.

The United States are the jack of all trades.  It’s a multi-talented country when collecting paycheques, although nearly half of the money earnt is made up from console based tournaments. These console tournaments are mostly hosted in the United States, where most countries you see in the list have a non-existent console community or scene for those games at all. Because of this, we see games like the Halo series, Call of Duty and fighting games being won by mostly Americans.

Besides the top three highest earnings in America solely from the strong American side Team EG’s $6,634,6060.68 win in the International 2015 for Dota 2. Including EG’s several other significant prize pools won in Dota2, there aren’t many more successors in the American scene for Dota 2. The majority of the rest is made up of Counter-Strike: GO and larger numbers of smaller console earnings to make them earn their second place for the United States.

China holds the top spot. Probably one of the least multi-game earning countries in the top five list, China is the premier country for Dota 2 which boasts almost 75% higher prize pools than its next Esports title competitor League Of Legends. The top 16 highest paid Chinese players sit around $1 million or more in prize money winnings each, all from Dota 2 tournaments. Therefore almost half of their top 100 earners are from Dota 2, and if you were to remove Dota 2 from the equation, China would be placed 5th on the list.

How To Make Money From Gaming – Streaming