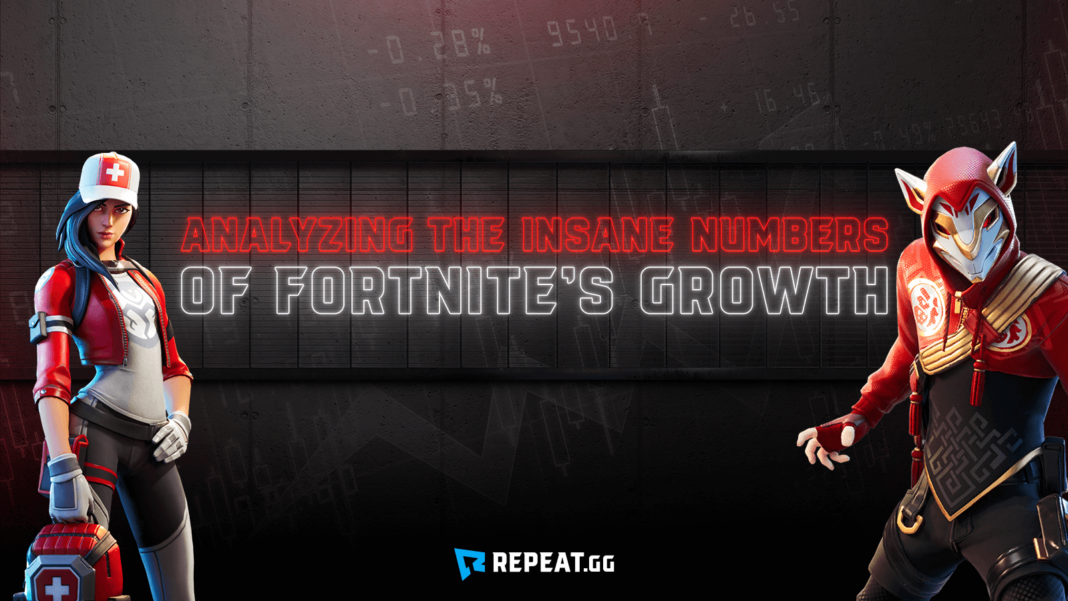 It’s no surprise that Fortnite made the biggest splash in the last few years as a video game with over 250 million player accounts. How did they do it?

Video games have captivated audiences for years but nothing has amounted to what Fortnite accomplished. Developed by Epic Games, Fortnite is a battle royale title and, although they weren’t the first BR title, it truly revolutionized the genre.

Their success in monetizing a popular free game brought other developers and games to enter the genre. Hit games like PUBG, Apex Legends, and Call of Duty Warzone would not be the same if Fortnite didn’t bring mainstream success to battle royales. Knowing that they’re a large part of video game success in the last decade, what happened to get them here?

Epic Games CEO Tim Sweeney revealed in March 2019 that Fortnite held 250 million player accounts (including inactive accounts) and that number is sure to have increased since. In that same month, Apex Legends developer EA announced 50 million players, within one month of the game’s launch.

Meanwhile, Fortnite competitor PUBG reports a peak of about 3.2 million players and a peak of 1.5 million average players in the game’s lifetime according to Steam Charts. But even after Apex’s colossal game launch and PUBG’s consistent player counts, Fortnite still won in terms of player retention. An important note is that one of the leading countries in terms of gaming audiences, China, still does not have complete access to Fortnite, further proving the popularity of the game.

Fortnite includes a player versus environment mode, Save the World, and their popular game mode, Battle Royale, launched in September 2017. Needless to say, Battle Royale is the mode that’s gained the most popularity and led to the battle genre becoming popular. The idea of the last man standing game is nothing new but Fortnite’s player numbers prove that this is what gamers needed.

Their peak player count was in August 2018 with 78.3 million active players according to Epic Games. It’s certainly a huge figure and it’s thanks to some clever marketing strategies that they became a video game leader.

The genre starting entering larger video game culture after The Hunger Games film was released in 2012, introducing society and media to survival arenas. Other games followed suit, like Minecraft mods and DayZ. By 2017, Fortnite reigned supreme.

What really stood out about Fortnite was the Battle Royale mode was completely free. Epic Games’ monetization came from battle passes, a purchased item that opened access to many quests and cosmetic items. Fortnite didn’t offer paid boosts in the game. Only cosmetics could be purchased, which may seem like an unprofitable business model at first glance. But surprisingly, it proves to be overwhelmingly successful.

With a free multiplayer game that fans can play with friends without a purchase barrier, Fortnite saw so many downloads that even the few who purchased in-game cosmetics and battle passes were enough to turn a profit.

The success and popularity of the game even helped Fortnite enter large partnerships with major cinemas. A limited-time game mode featuring Thanos from the Avengers: Infinity War movie saw success in 2018. The end of 2019 brought Star Wars to Fortnite and Fortnite Chapter 2 Season 2 lets players unlock a special Deadpool cosmetic skin. Fortnite doesn’t hold back when it comes to interesting events enticing players.

A big boost to the success story lies in the Fortnite streamers and content creators who pushed the game to the front. No matter how many downloads a competitive video game has, it won’t see huge success without some faces and brands bringing the game to the top. Streamers like Tyler “Ninja” Blevins and Timothy “TimetheTatman” John Betar helped pave the road for cultural success. Fans began associating top streamers with Fortnite, an unintentional marketing strategy for fans to learn about Fortnite.

With no barrier to entry since the game is free and available on PC, PlayStation, Xbox, Nintendo Switch, and mobile devices, there is always an influx of new players. That means the Fortnite streaming community stays consistently strong because new players are always capable of an easy entrance.

This includes younger players looking to make their professional career in esports. Epic Games recognized how streamers have contributed to Fortnite’s growth and began rewarding them with their own cosmetic lines. Ninja was the first to receive his very own skin and more streamers continue to receive personalized skins or dances.

A large complaint the Fortnite community previously held was a lack of esports competition. For a while, Epic Games didn’t host official tournament events until 2019, when they got serious. In the 2019 competitive year, the prize pool was a massive $100 million. A prize pool like that brought many players looking competitively and casually as pros or streamers.

In February 2015, then 15-year old Martin “MrSavage” Foss Andersen won $30,000 at DreamHack Anaheim, a convention which is a combination of esports tournaments and gaming culture. The Fortnite esports scene remains strong and opens opportunities for all sorts of gamers.

One of Epic Games’ major accomplishments is their launch of Fortnite Chapter 2, the most viewed gaming event in history. In October 2019, Epic took Fortnite offline by removing gameplay and putting a loop of a black hole in the game instead. They also removed their entire Twitter history, deleting hundreds of posts just to leave one post about Fortnite leaving. The next 36 hours saw millions of tweets speculating about Fortnite’s drop until they made a huge launch with their teaser video showing off new features and a new map.

Epic’s goal was to build interest in the game to recapture the dwindling engagement that comes with every game. Not only did they accomplish that, they went much further, having users stream over 50 million minutes of a looped black hole, waiting for new animations or hints at what was going on. Twitter performed a case study to analyze Fortnite’s growth during the event. They found that the black hole event became the world’s top story, amassing a huge following of over 500 thousand followers.

A lot of credit goes to Epic Games executing the right methods to maximize Fortnite’s audience. The Fortnite phenomenon only occurred thanks to Epic’s marketing strategies and decisions for paid content. Using a free model to attract players and constant pushes of new paid content, Fortnite made $1.8 billion in revenue for 2019. Remember that this is a free game so players don’t even have to spend a dime if they don’t want to. Fortnite’s numbers will stay strong for much longer at this rate and fans are in for more exciting surprises as the game grows.

Thanks for reading! If you enjoyed this, follow @repeatgg on all social media platforms. Also, sign up here to compete in our Fortnite or Dota 2 tournaments.

10 Biggest Esports Titles in the World by 2019 Viewership