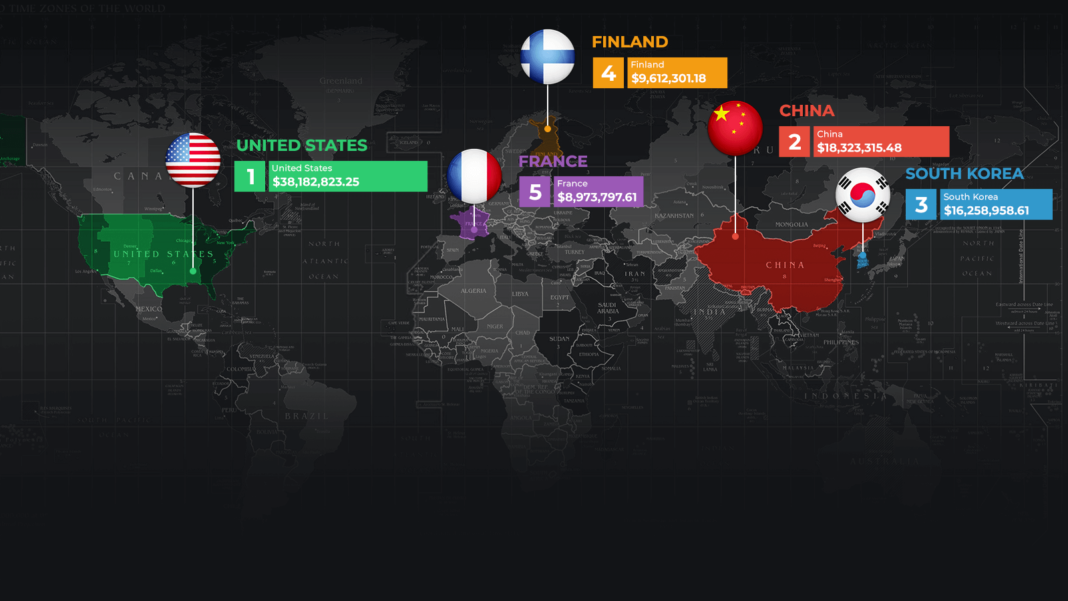 Esports industry earnings continue to skyrocket as the business grows; these were the highest earning countries in esports in 2019.

These days, we hear about the influx of new money into esports on a daily basis. Yet, it remains surprisingly hard to pin down how much of it is going around in our scene at a given time. Estimates by market watchers can vary substantially. It’s still hard to put an actual price on viewership and most of the industry’s companies only publish financial information in the form of marketing materials.

Fortunately, there is at least one other solid indicator that we can use and that’s prize pools. How much our athletes take home compared to the years before tells us something about how far we’ve come after all. It also gives us an idea of what the biggest markets in our industry currently are, although we’re of course only measuring that by winnings and not total players.

In brackets is their position on the list last year. Similarly, the percentages denote a comparison to its 2018 performance.

There are some interesting things to unpack here.

Search Jobs in the U.S.

On top of that, last year saw the prize money for the top ten distributed between 10,950 players. This year that number was 10,955, an increase of only five.

These numbers suggest that esports’ growth, at least in the professional segment of these countries, has almost entirely been an increase in prize money and not one of player base.

The Elephants in the Room

So now we know that there is, relatively, the same amount of money at the top. Yet if we look at the percentages, the distribution of these winnings has strongly shifted. France, Canada and Australia, for example, have seen a strong increase in money, while staying on a similar number of players. Finland and the United Kingdom saw big increases as well on even fewer players.

These changes can be explained in two words: Fortnite and Dota.

In 2018, Epic Games made a commitment of $100,000,000 to its Fortnite esports circuit. It was made halfway through the year, however, and the first official World Cup only took place this July. Which means that this year is the first where we see the full effect of this.

Similarly, Valve’s premier Dota 2 event, the International, has grown from a “humble” $1.6 million get-together in 2011 to a $34,330,068 crowd-funded juggernaut this year. Its winners, OG Esports, took nearly half of this money, which greatly shifts the balance in their respective home countries. (Johan “N0tail” Sundstein’s country of Denmark benefited less from this, as Danish CS:GO squad Astralis really messed up the 2018 stats with all the winning they did that year).

China and Russia did a lot less well in Dota this year, which is reflected in their standings. The latter country even comes in at a twelfth position for 2019, after being the sixth earner twelve months ago.

The weight these games’ relatively few events have on their overall circuits is reportedly one of the reasons Counter-Strike pros rejected Valve’s proposal to create a similar event for their game. It does mean CS:GO is now the third highest paying game in esports, down from the second position last year.

In conclusion, it’s safe to say, economically, esports is still doing very well for itself. It is slightly worrying that two games have such a big influence on the overall rankings though. In the same vein, the fact that 59% of the prize money is concentrated in the top ten countries is understandable, but perhaps not the best for long-term growth.

If anything, we hope that in 2020 we can even this out a little, to support and grow the smaller scenes. But of esports still being here by then, there should be no doubt.

Repeat.gg has several free-to-enter tournaments currently live! Sign up now and compete in League of Legends or Dota 2 tournaments.

The Biggest Esports Competition Fails Of All Time