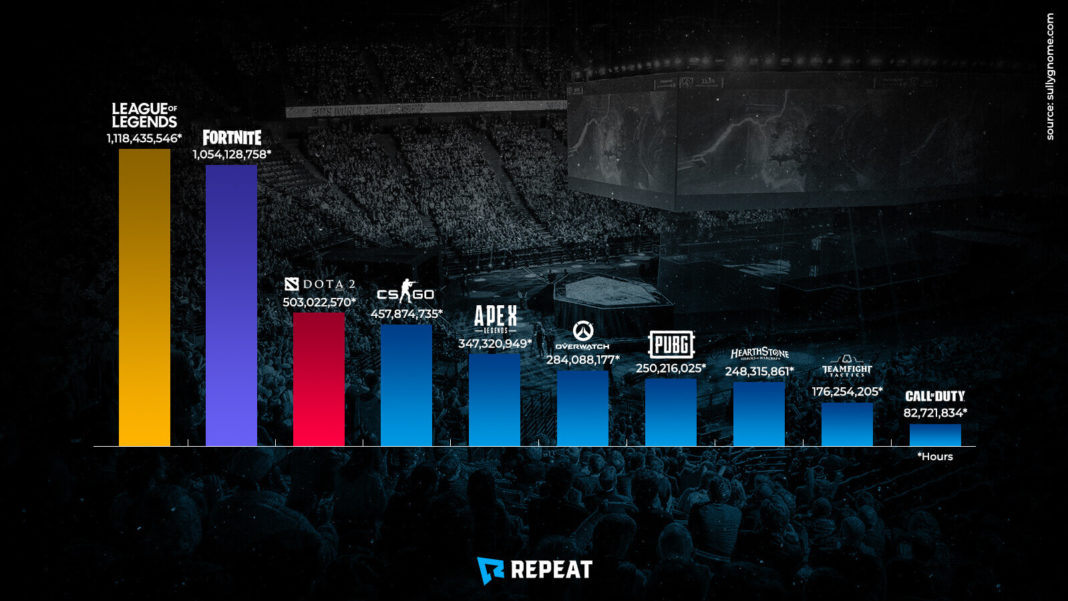 The esports industry wouldn’t be where it’s at now if it weren’t for the 10 biggest esports titles in the world leading the charge.

Esports has become much more competitive in recent years and not just with teams. Esports titles themselves constantly compete by trying to capture players’ attention. Nowadays, the best way to capture which esports are considered the best is via player viewership.

The 10 biggest esports titles in the world based on player viewership are listed below. Viewership numbers will be based on the SullyGnome data for Twitch, currently the largest streaming service, from the beginning to the end of 2019. Note that titles making the list are considered esports games and that not every game qualifies as an esport.

Call of Duty esports began through local tournaments, slowly evolving up to the current franchise scene. The competitive scene truly began when FaZe Clan uploaded their first montage. Though it’s rarely one of the top scenes, the Call of Duty esports scene exists and performs consistently for years.

This year with the release of Modern Warfare, the esports scene made a dramatic change. Activision Blizzard announced the Call of Duty League, a new franchised esports league with 12 city-based teams who reportedly paid $25 million each to join. Modern Warfare had 9,444 average viewers during 2019, though the game launched in the last few months.

Teamfight Tactics takes the ninth spot on the list with an average of about 20 thousand viewers. Launched in June 2019, TFT kicked up the movement of the “auto-battler” strategy genre.

Although TFT is technically just a game mode in League of Legends, the game is drastically different from League, so much so that Twitch recognizes Teamfight Tactics as its own game category. It’s nothing new to the esports community, but TFT’s entire game model originated from Valve’s game mode, Dota 2 Underlords.

Just above Overwatch when it comes to viewership numbers is Player Unknown Battlegrounds, another battle royale game with a grittier style to it. PUBG holds an average of 28,349 viewers on Twitch. Boasting a mobile game as well is a sign of their success. PUBG comes marketed towards any and all gamers, encouraging both casual play and competitive play in PUBG Global Esports.

While mobile numbers were not disclosed, PubG Mobile was ranked in the Top 10 for most viewed games on YouTube in 2019. Mobile gaming continues to be a massive market for the younger audience.

Hearthstone remains a top esports title even with a largely different genre than the rest. A digital card game released nearly six years ago starring characters from Blizzard’s World of Warcraft universe, Hearthstone developed its esports scene throughout the years, relying a lot on the collegiate scene in Tespa which awards $150 thousand in tournament scholarship money.

Hearthstone viewership stats increased recently for headliner news with the Blizzard-Blizchung drama and the first female GrandMasters Champion. Hearthstone garners an average of 28 thousand viewers in 2019.

Even after facing many changes in recent months to solve the meta problems, Overwatch still shines as a top esport. Buffs and nerfs have been rampant to eliminate the GOATS meta and now the double-shield meta.

Though the community is unsatisfied with how Blizzard is proceeding, the Overwatch League franchise keeps a strong viewer base. In 2019, Overwatch viewership peaked at 321,314 viewers on Twitch. With weekly hero bans in place and OWL becoming exclusive to YouTube, Overwatch heralds an exciting future holding an average view count of 32,433 viewers.

Next on the list is Apex Legends, a high-movement battle royale game. Launched just over a year ago, Apex swept the entire esports scene immediately upon launching and it was the No. 1 played game in the world for a short time.

Apex Legends hit 10 million players after three days, 25 million after one week, and 2 million concurrent in that week. Since launch, the number of Apex players and fans has drastically dropped from a peak viewership of 674 thousand last February to a 2019 average of 39 thousand viewers.

The game obviously lost a ton of steam among fans, but Apex Legends continues moving forward, entering Season 4 just a week ago and debuting a new professional league this year.

Older PC gamers are all too familiar with Counter-Strike, a tactical first-person shooter with an emphasis on team play. Like Call of Duty’s Search and Destroy mode, this game is a suspense thriller when watching it.

Global Offensive is the latest title in the series with a competitive format consisting of large scale tournament series, like ESL One, DreamHack, and ELEAGUE, known as Majors and Minors. CS:GO held an average viewer count of 52 thousand on Twitch.

Dota 2, also known as Defense of the Ancients, is a MOBA game that truly started the genre. Developed by Valve, the game grew massively in popularity with The International, the pinnacle of Dota 2 competition each year.

This world class event makes headlines each year with bigger and bigger prize pools. Last year’s prize pool garnered over $34 million, gathering more and more attention, and this year will surely be more. With the help of The International 9 and the dedicated fanbase, Dota 2 held an average viewer count at 57,429 viewers.

In 2020, every list of the biggest esports titles will include Fortnite. The game that truly revolutionized battle royales, Fortnite captures youth audiences and recently took advantage of an esports scene with the Fortnite World Cup, boasting a combined 2019 prize pool of $30 million.

The solos tournament was won by then-sixteen-year-old Kyle “Bugha” Giersdorf, who took home a cool $3 million. Fortnite averaged 120 thousand viewers on Twitch in 2019. Fortnite is also the only game on this list with publicly announced YouTube numbers of 60 billion views in 2019.

Unarguably the biggest esport title for years now is League of Legends. Although the MOBA game was taken from Dota, developer Riot Games optimized the game for beginners and marketed the game to all audiences.

Every PC gamer knows of League, especially with growing audiences for their World Championship and streamer culture. League of Legends averages 127 thousand viewers at any time.

Today’s 10 biggest esports titles made their way here through solid games and strong community support, paving their way to becoming an esport. Just like within the games, the esports scene is also competitive, with a new hit that can appear at any time. TFT and Apex launch in 2019. Which game will launch in 2020 and become the next biggest esport? Follow us on Twitter and Facebook and let us know.

Repeat.gg is one of the world’s largest automated esports tournament platform. Sign up today to start earning cash and prizes in League of Legends and Dota 2. Stay tuned for Fortnite and other games coming in 2020.

Highest Earning Countries in Esports in 2019